Quote
Closed Energy Loops For All Of Australiena 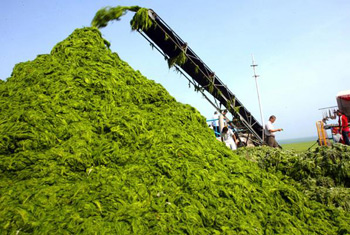 Algae power is the most efficient biofuel, their are others biofuels which are already being invested in like oil palms, oil seeds & sugercane ethanol & conifer tree methanol as well as others.

(Glasshouse Roads) are roads that are covered with long continuous elongated glasshouses, so as to capture fumes released by the vehicles, these fumes are then used as nutrients in algaculture.

Has the world misused fossil fuels ?

Since mankind discovered fossil fuels he has done his best to use up as much fossil fuels as he possibly could, with total disregard for future generations & in regards to crude oil reserves which is usually converted to petrol or diesel fuel, well their is only 40 years left of supply, unless more fossil fuel oil pools are discovered. The media is broadcasting shows like farmer wants a wife to encourage people to learn to live off the land, hopefully respecting the schools of permaculture & monoculture as fossil fuel petrol & diesel resources are becoming harder to find. Theirs alot of coal in this world & its possible to convert coal into liquid fuel but alot of enviromental groups are against this.

What is clear is that oil is getting harder to find and extract, and this is reflected in rising prices. A barrel that cost $10 in 1998 and $64 in 2007 today costs $135. Economists are predicting that the $200 ceiling will be broached before the end of the year.

Fossil fuels are supposed to be used in landscaping & excavating, creating permaculture habitats & monoculture areas, for humanity to exist. People should learn how to use SUV's with attached trailers for transporting produce around for thats what SUV's were designed for. Utes are ok, chainsaws are cool. Tractors, bobcats & excavators are fun. Motorbikes & scooters are great & trucks are good for those big jobs. If their are to be built up urban areas or cities then these people should work in industries like food engineering & mechanical engineering. We should really concentrate on using fossil fuels for landscaping permaculture & monoculture habitats.

Alot of work has to be done before Biofuels will replace fossil fuels, Australiena actually lags behind many other countries around the world in the field of biofuel cultivation. Reason being its going to take alot of work by alot of people to establish biofuel production.

Note its possible for robotic machinery to cultivate biofuels & even alot of our food can be cultivated by robotic machinery, this would free up time for humanity to concentrate on writing, mathematics, design, divination, scientific investigation & classification & academic research.

Possibly they could but this would involve investing in renewables like Geothermal, Hydroelectricity, Solar energy, Tidal power, Wave power & Wind power. Alot of machinery would have to be made to be electric instead of running on fuel. Possibly vehicles will run on roads that have a rail at the same level as the road, note the vehicle does not have to make contact with the rail for a tesla coil can transmit electricity without wires, this would do away with cumbersome batteries & a overhead electric grid.

What about gas powered vehicles ?

Well gas might be able to bridge the gap, until we have electric vehicles or biofuel powered vehicles, but we should really concentrate on investing in biofuels & renewable electric power generation in the mean time.

[4] Electric propulsion, well we are getting their slowly.

The Global economy is a failure

Australiena is the world's highest carbon emitter, for Australiens are the world’s worst CO2 emitters per capita. The decision to ratify the Kyoto Protocol has not been enough, alot more needs to be done.
The main reason why Australiena is the world’s worst CO2 emitter per capita is that Australiena relies heavily on global trade. Technologies like the internet make the global economy work. Freedom of access to technologies, designs, patents & scientific & academic developments from all over the world. However, the logistics of the global trade of goods can consume so much energy that global trade becomes very energy demanding & may even have to be stopped, their can still be the global trade of information, freedom of access to technologies, designs, patents & scientific & academic developments from all over the world, by using technologies like the internet. But when it comes to the actual global trade of goods well this should be reduced or maybe even stopped. With technologies like robotics their is really no need for the global trade of goods, as long as continents have a geographically diversified homegrown robotics industry. The high Australien dollar is not sustainable for it results in the over consumption of energy resources while future generations will miss out on utilizing the worlds energy resources. The logistics involved in transporting goods into & out of Australiena via overseas burns alot of energy resources. People have no idea how much energy resources are wasted by importing & exporting goods overseas. Its about time machinery & other goods were manufactured in Australiena like was done in the past & the only way for this to happen is when Australiena has a low dollar value & is not overly engaged in the global trade of goods. Electric propulsion is 20 times more efficient than fossil fuel propulsion. So what do we use fossil fuels for ? We use fossil fuels to build renewable energy infrastructure. Australiena really needs marshall law to implement the construction of renewable energy infrastructure, otherwise we may as well go back to the horse & cart.

Shouldn't we be exporting electricty to Asia !

Wouldn't the better option be to export electricity to Asia via cable, Japan would be a good starting point.